Working our way up north from Ushuaia we took a flight to the little town of El Calafate. From here we took a day trip to the famous giant glacier – Perito Moreno- in the national park a few hours drive away and carried on up to the chocolate box picture perfect town of Bariloche.

El Calafate
The town of el calafate is a ski resort for most of the year and this was evident even in summer with the wooden framed chalets and small homey cafes.
The main draw of the town aside from skiing is the giant glacier in the national park 90 minutes drive away.

Most people visit the glacier on part of a package tour but we chose the budget option and took the public bus.
The bus cost 450 pesos return and left the main station at 8am. After paying the 150 peso park entrance at around 10am we began our walk to the glacier and heard it before we reached the viewing platform. 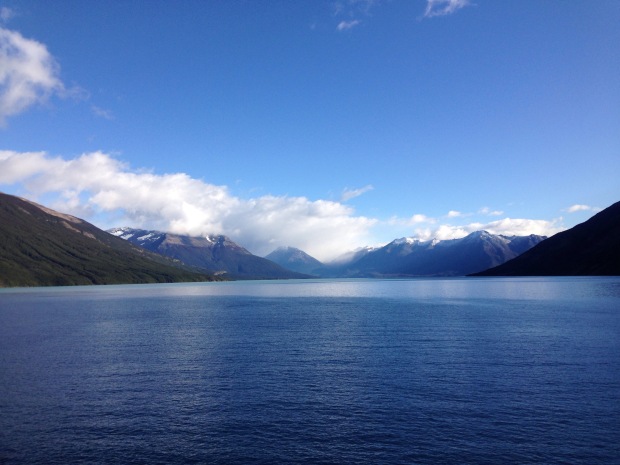 The sound of the ice chunks breaking off is monstrous and simply breathtaking.

After running to the view point to see where the ice had fallen all that was left by the time we’d reached the spot were a few ripples in the water.
Apparently the best time of day to visit the glacier is in the late afternoon when the sun has had longer to melt the ice but the morning we visited plenty of ice chunks broke off.

Although the ice chunks are sometimes difficult to spot at first they break off really slowly so by the time the breaking sound reaches your ears your eyes dart to the falling ice before the chunks even reach the water.
Letting gravity do its job the chunks crash into the water below and create huge waves which continue rippling for a good few minutes.

Although Leah and I got a little bored after an hour of this the sound of the first ice sheet breaking is prominent in my mind even a few months later.

Getting to calafate and away
The town of el calafate is about a 45 minute drive from the airport and taxis all have a set price of 360 pesos. Our next stop after calafate was Bariloche which cost us 2,400 pesos for a bus which left at 3.30pm.

Bariloche
Our journey to Bariloche was long (27 hours) but was completely worth it when we checked into our hostel in the little chocolate shop town for Santa Semana.

Calle de Mitre (chocolate street)
We arrived in Bariloche late the previous evening and woke up to breakfast in Gavindas hostel where we were staying.
Due to its proximity to the centre of Bariloche we walked to the tourist information centre in the main square via Calle de Mitre.

Although all of the streets in Bariloche look like something out of a Christmas skiing advert Calle de Mitre steals the show for a lot of visitors- it is basically a 1km long street full of chocolate shops!
After strolling down the streets, briefly popping into the shops and sampling the free chocolate on offer we made it to the tourist information centre. Here we were told that President Obama was in town so all of the main roads of out the town were closed and the main trek to do was off limits due to its proximity to where President Obama was staying.
With this is mind we spent the rest of the morning wandering around the town and popping into the shops.
After lunch we took the bus for 40 minutes (9 pesos) to waterfalls that the tourist office recommend that we visit.

It took about 35-45 minutes to reach the waterfall but they were pretty unimpressive (especially compared to iguacu). Luckily the park that the waterfalls actually were in was much more interesting and after a small hike uphill we were afforded with a beautiful view over the nearby lake.

Good Friday
We woke up early on Easter Friday to get the bus to the national park but spent almost an hour trying to find somewhere to top up the travel card we needed to use. Due to it being Good Friday most of the shops were closed, including the travel card kiosks, so we had to buy a subte card (a newer version) for 50 pesos instead.
The bus journey took just over an hour and the stop is almost impossible to miss as it takes you straight to the famous llao llao hotel. From here it’s a 1km walk to the tourist desk at the edge of the national park where you’re provided with a map of the possible treks in the area.
We started off with the main lookout point at the top of a steep 3km trail which afforded us with beautiful views of the national park and huge lakes below. 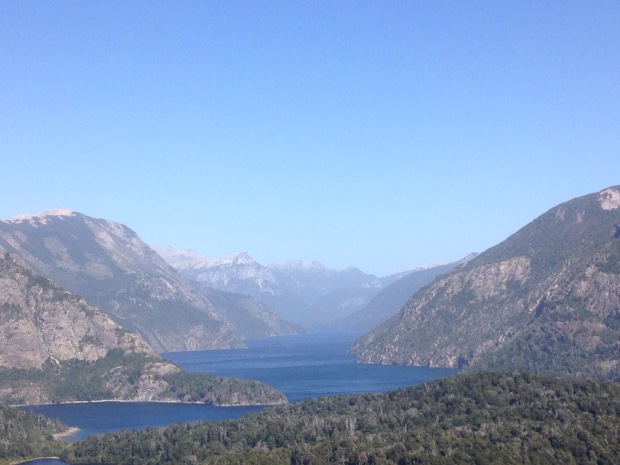 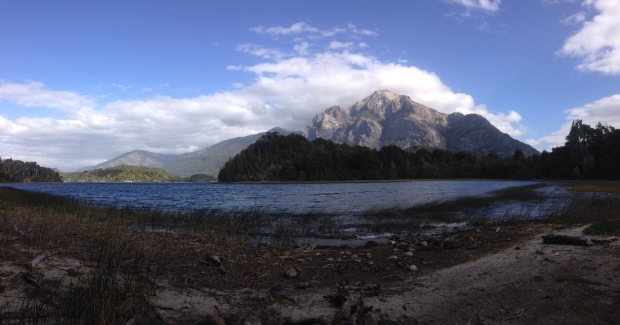 Although there are lots of different trails to take here they’re mostly straight forward to follow and seem to loop back and join one another regularly. The furthest point we walked was to Lago Negro where we sat on the decking overlooking the lake eating satsumas before summoning our strength for the walk back to the bus stop.
The whole days walk took us around 6 hours (including stops) and we covered over 17km (mostly uphill) so was pretty tired by the time we got on the bus back to town.

Saturday
Bariloche has lots of events taking place over Santa Semana and one of the most famous is its chocolate display.

For the past few years the chocolatiers in town have created a giant egg which they break apart and hand out to the crowds watching.

This year however they had decided to create a 150m long chocolate bar running down calle mitre.
The event started at 10am when crowds of children and adults began to gather around the edge of a barraded section of the street filled with tables, mixing bowls and spatulas. 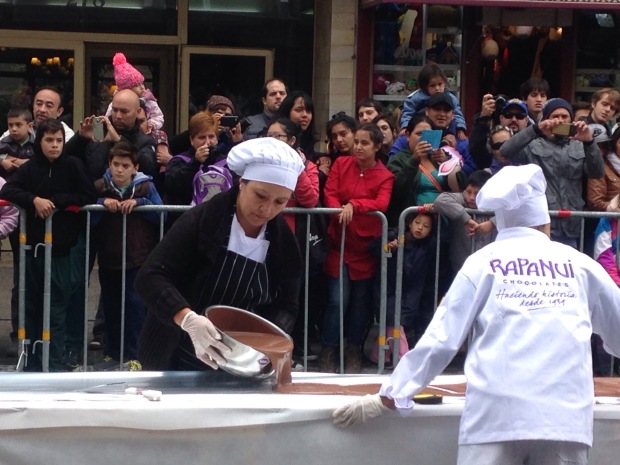 After an hour the streets had become completely filled with both tourists and locals who all wanted to witness the chocolate creation and to have a sample of the finished piece.

The creation of the chocolate bar began around 11.15am and within 30 minutes the 150m bar had been built.

Each chocolate shop seemed to send a few Chocolatiers who worked on a around a 5m long section, adding in their own ingredients to leave this chocolate mark. It was an impressive site to see. Not just this giant chocolate bar but the buzz from the town surrounding it! 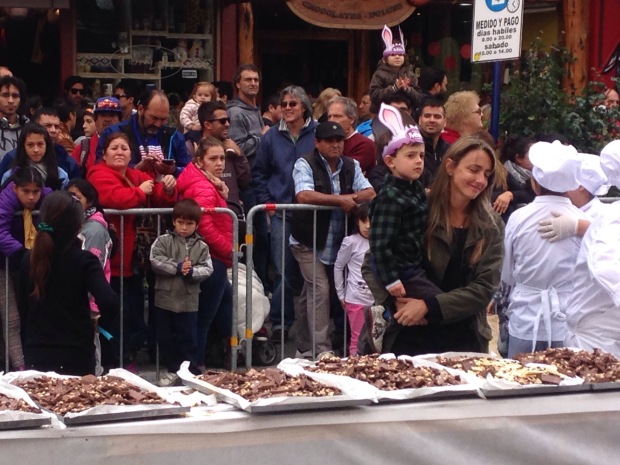 Once the chocolate had set it was cut into small pieces and handed out throughout the crowd. Everyone was going crazy, pushing and shoving to make sure they got a piece!

After breaking out of the crowd we made our way to the beach and sat on a bench warming ourselves before heading back into town.

By now all the crowds had dispersed so we popped into one of the many artisan beer restaurants/ pubs on the way home and tried one of their most poplar beverages- a strawberry beer for 45 pesos.

Easter Sunday
Due to us being in Argentina, a very Catholic country, we decided to attend the Easter mass taking place at the Catedral at 11am. 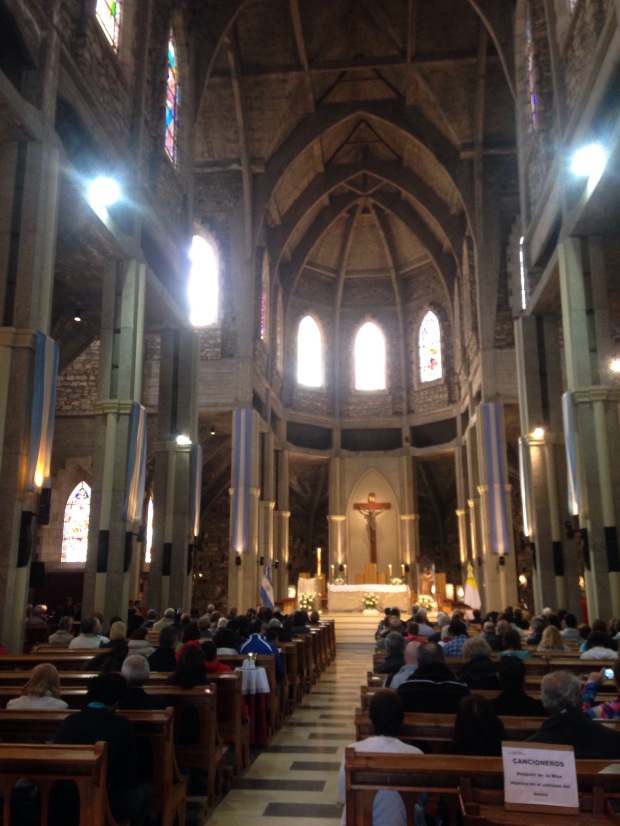 Although I grew up Catholic, attending both Catholic primary and secondary schools (even attending an all girls convent school) I haven’t been to church in over 6 years, and Leah has never been in her whole life so an Argentinian Easter mass was a little overwhelming for us both- and not an experience we’re looking forward to repeating for a long time!
Although the main reason for Easter is due to the story of Jesus’ resurrection, I much prefer the commercialised agenda of giving and receiving chocolates and presents.
Due to Leah and I being on a different continent to all of our friends and family we decided to buy each other some chocolates from one of the chocolate shops as a little easter present. For £5 we got 250g of really nice chocolate which we proceeded to eat on a bench overlooking the lake.

After munching on our Easter chocolate we went back to our hostel and cooked ourselves an Easter dinner.

To be honest it didn’t have anything really to do with Easter we just wanted an excuse to cook ourselves a really nice dinner and have a great bottle of wine to wash it all down with…
After our great bottle of wine we were a little tipsy but made our way to the final Easter event being held in the main square. A huge crowd had gathered in the square surrounding a stage on the far side where a band was playing Beetles covers.

Parents were there with their children dancing alongside groups of teenagers and other adults- it was a really nice sight to see.
Good things never last and shortly after we arrived a new band took to the stage. We’d noticed little girls with band logos on their tops and people selling band merchandise with the name Maranas on earlier in the night. Once this group took to the stage me and Leah swiftly exited the area. The music was honestly like a bad version of one direction- far too cheesy for my Santa Semana!

Not only are there lots of nightclubs alongside the beachfront there is also a whole street in town which is cordoned off every Friday and Saturday night for local musicians to showcase their skills.

There are also plenty of bars and restaurants which have live performances each night or at least decent music playlists.

Food in Bariloche
The food in Bariloche isn’t much more expensive than the rest of Argentina especially considering the holiday vibe of the town. Saying this Leah and I cooked most of the time we were there because we had a decent kitchen, were craving vegetables and had a supermarket a few minutes walk from our hostel (Carrefour). We did eat out a few times and for vegetarians and vegans the same problems are still there since arriving in Argentina. Vegetables are hard to come by in most restaurants and the only real veggie friendly dish is pasta with tomato sauce… Not a very exciting choice!

But Bariloche does have dark chocolate!

Bariloche at a glance
The small town of Bariloche is definitely worth a visit if you like chocolate, trekking, relaxing, seeing beautiful landscapes and even skiing in the winter months. I can’t wait to return in a few years!