Our journey to Savankhet was actually farcical. We were picked up from our hostel on time but by a tuk tuk rather than the mini bus we were expecting.
After launching our heavy bags on top of the roof, the driver crammed as many people as possible into the seats/ area we had left to breathe. He then took part it what can only be described as a tuk tuk race down the side streets with another driver, each one over taking the other and slowing down, and then swerving across the road to stop the other one over taking.
At the time it was a little worrying when the front on the tuk tuk behind looked like it would hit the back seats of our tuk tuk….
The driver dropped us all off at the main bus terminal about 30 minutes drive out of town and it was here that we were told that we could get our bus to Savankhet…. No buses at this station were going there! One was going to Pakse and ended up driving us to a different bus station where we could get our pre-booked sleeper.
That journey was hilarious aswell because we didn’t have any seats booked so had to sit up front with the driver on top of our luggage. It wasn’t even that short a journey but after an hour with numb bums we were finally at the right bus station!

6 hours of spooning leah on the sleep bus and we were dropped at the out of town bus station in Savankhet at 3am… 3 hours earlier than scheduled!
We struggled to find a tuk tuk at that time in the morning but eventually flagged one down and asked the driver to take us to one of the hostels we quickly searched for in our guide book; the Leena Guesthouse.
Luckily when we arrived there was a private room available for 50,000k combined so we checked in and went straight to sleep!

Savankhet
We were planning on spending the whole day in Savankhet, leaving late that evening to get the bus to Pakse, but were informed in the morning that the last bus to Pakse left at 12pm!
We didn’t even wake up until 9am after our disturbed journey the night before so had to decide whether or not to stay an extra night or see everything we wanted to see in just over 2 hours. Due to our tight time limit for Laos we chose to run around Savankhet instead.
We grabbed breakfast on the way to the riverfront and only then did we realise how small the town was!

Dinosaur museum
Although Laos isn’t exactly famous for its dinosaur artefacts we couldn’t pass up the opportunity to visit the dinosaur museum in savankhet. The signs on the outside of the building filled us with optimism that the museum would be interesting and worth the 10,000k that we had to pay to enter but unfortunately it was a bit of a let down. 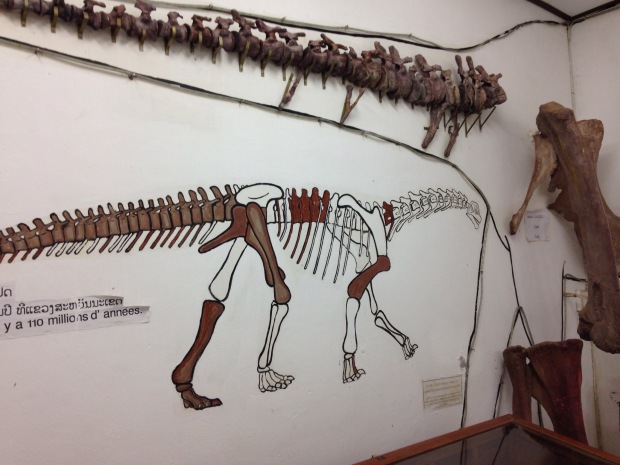 Calling it a ‘museum’ is pretty complimentary because it was literally two rooms with a few cabinets inside which claimed to house genuine dinosaur bones and fossils. All of the information (a few sentences on each artefact) was written in French and Laos so it was a bit of a waste of time and money…

Anyways after the flop of the dinosaur museum we were much in need of a coffee. I absolutely loved Vietnamese coffee and had high hopes for Laos coffee so we set off in search of a little coffee shop near the old market area. Savankhet wasn’t doing very well this morning because instead of getting the tasty Laos coffee we thought that we ordered we were disappointingly served instant coffee instead! I’m no coffee snob but I didn’t enjoy this substitution…
Our time to explore Savankhet was up by 11 so we ordered lunch to go (green bean salad with a plain baguette) and walked back to our hostel where we’d left our bags.

The hostel manager was actually lovely and ordered us a tuk tuk to take us to the main bus station, he even helped us barter the price down a little (10,000k per person seems like the standard price)!

Bus palava
We tried to book our bus ticket to Pakse in our hostel but were told that you can only buy tickets from the main bus station itself and that tickets are only released 30 minutes before the bus departs.
We wanted to get the 12pm bus so made it to the bus station for 11.30 to buy our tickets… They were all sold out!
Luckily there was another bus leaving for Pakse at 2pm that day even though that service wasn’t advertised anywhere. So to ensure we got a ticket we sat at the bus station and asked the ticket vendors every 15-20 minutes or so if we were able to purchase our tickets yet. We knew that they shouldn’t have gone on sale until 1.30pm but we weren’t sure how strictly they adhered to this…. Very strictly!

Journey to Pakse
The journey to Pakse only lasted for five hours luckily because anymore than that and it would been a right struggle. It was probably the grimmest bus that we’ve ridden on so far in South East Asia, the seats were really cramped and the air conditioning didn’t work so I had to have my window open the whole way meaning that all of the dust and dirt off the road and vehicles that we passed settled on my face….
The views from the bus were amazing though and were not spoiled by the fact that I had to wear my sunglasses at all times to shield my eyes from the dust and debris flying in through the open windows.

Pakse
We literally had an absolute flying visit in Pakse which is a shame because we’d heard great things about it.
We stayed at the sabadaye 2 hostel and paid 50,000k for a private double room. The room was pretty basic but clean and was really close to a few restaurants. It had a really nice outside area which unfortunately we didn’t get to spend much time in because after booking our bus ticket to dondet for the following morning, we only had time to go for dinner (which was huge and so tasty!) before we were ready for bed….