We arrived in Vientiane in the afternoon after a short bus journey from Vangvieng.
After checking into the Funky Monkey hostel we went for lunch in one of the small restaurants opposite for some Pad Thai as we planned to rest of our day.
Although Vientiane’s the capital of Laos we were told to only spend one night as there is more to see in the rest of the country.
Back at the hostel we met up with some of the girls that we had just left in Vangvieng and took a tuk tuk to Wat Sok Pa Luang to take part in the Vipassana Meditation guided by novice monks.
Guided meditation
I’m so happy that I looked in our lonely planet and read about the guided meditation during the day because it was a really good experience.

The novice monks take a group of tourists and locals through one hour and a half of Vipassana meditation each Saturday from 4pm.

Unfortunately we missed the first 20 minutes of the practise because we were sitting in the wrong room…. But once we finally found the right part of the wat we took our shoes off and joined the group sitting cross legged on cushions with their eyes closed and meditating.

After around 20 more minutes we took part in 30 minutes of mindful walking where we strolled barefoot around the grounds thinking about the movement. It was great just to slow down and really feel every muscle, tendon, ligament and bone in your body moving simultaneously.
After that we all took our seats once again and sat meditating until the gong was rung and the practise was brought to a close. The novice monks then held a question and answer session for anyone that had anything to ask. It was really interesting!
As we exited the wat we were handed a booklet about Vipassana meditation as the sunset over the entrance. It was perfect! 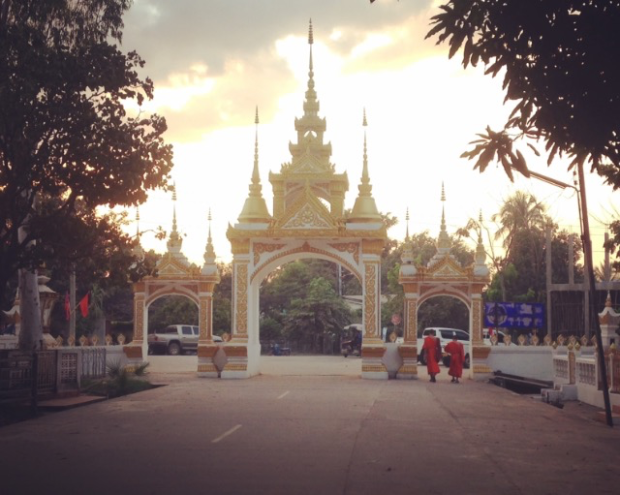 We were planning on walking along the riverfront after the meditation practise but were told that its against the law in Vientiane. Anyone out there after dark would be fined up to £300! We weren’t sure whether or not to believe the informer but once back at the hostel we saw warning posters dotted around the reception area.
Instead we walked to the local park and ate in one of the small restaurants on the side of the road. Although the service was really slow the food was actually pretty tasty!
Back at the hostel we played a few games of pool and had an early night.
Running along the riverfront

Although the riverfront is closed in the evening it’s fair game for everyone whilst the sun is up. To take full advantage of this I woke up at 7am and went for a long run along the river.

The route was great because a paved pathway ran between the river and the road which meant that the pathway was pretty empty! Therefore there weren’t many people to dodge or dogs to try to avoid!
The weather was really good too, not too hot or cold so I was able to run the first 8km really comfortably. I even managed to spot the unicef building about 6km and win a strava segment just after!
Walking tour of the city

We spent the rest of the day walking around the city and seeing some of the sites recommended in our guide book. We passed lots of embassies, wats and even the odd church but the highlight for us both was sitting under a little umbrella in a cafe with a cold bottle of water, hiding from the midday sun shine. 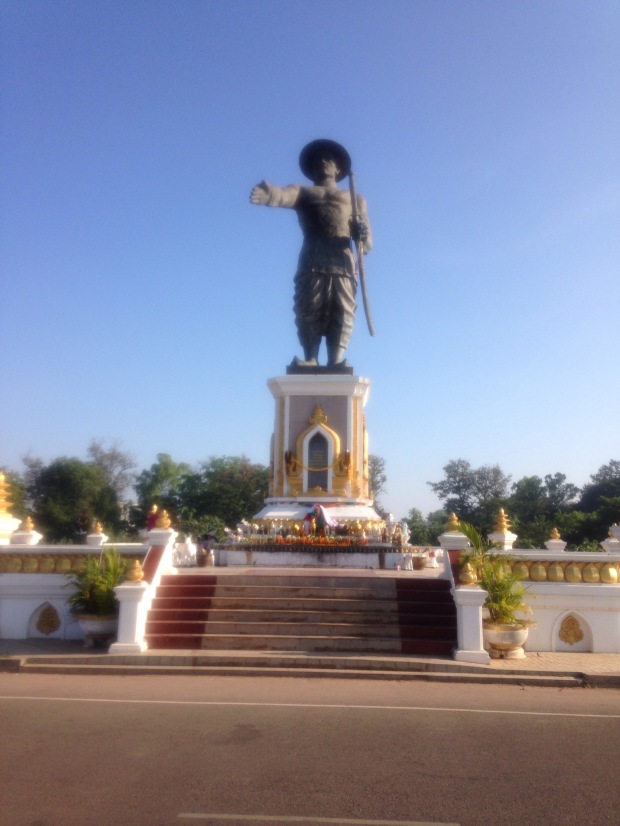 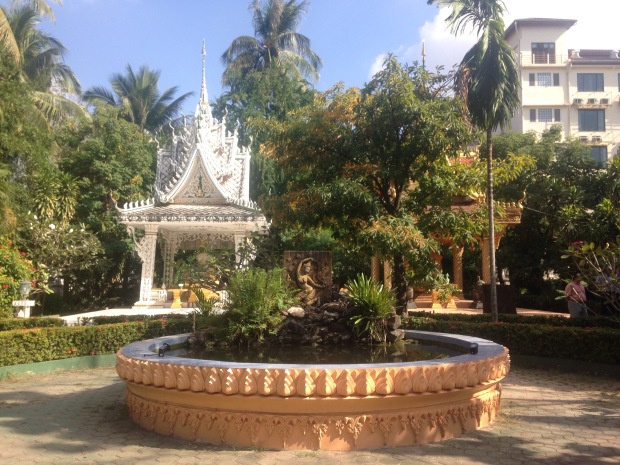 I bought mango from one of the street sellers afterwards and munched this with the chilli salt they gave me in a little back as we walked back to the hostel area for lunch.
Vientiane night market
Although the riverfront is a no go zone after dark, the night market close to the river is in full swing by 5pm. Our bus to savankhet was due at 7pm so we popped there for an hour before looking for somewhere to have dinner.
The night market was actually really big! It was more of a local market than one specifically for tourists which was a really nice change. Although we didn’t buy anything we did attempt to buy a dress but it was ridiculously overpriced so we bailed.