On Monday we went on a day trip to the Mekong Delta.

We used the same travel service as the Cu Chi Tunnels trip and we had a really good day again (if anyone wants to use this service its the tour office next to Subway along the Main Street)!

We were picked up by the coach at 8.30am and stopped for a quick toilet break at a service station an hour later. The service station looked more like a holiday resort than somewhere to just refuel and use the bathroom! It was so pretty (and pretty overpriced to go with it)! 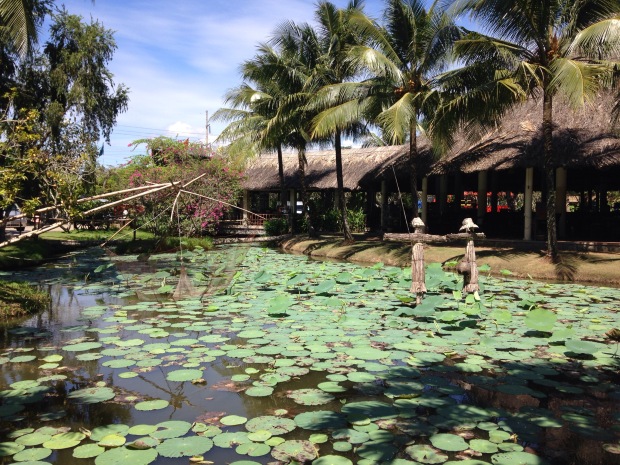 Back on the bus we made one more stop before reaching the Delta. We visited the oldest and richest Buddhist Temple in the Ho Chi Minh area and it was really odd. Giant white Buddhas were dotted around the grounds, with the largest being well over 20 metres high!

When comparing it to the temples that we visited in China, this one in Vietnam seemed more like a tourist trap/ garden centre. It even had chewing gum promotion of the benches!

We finally arrived at the Mekong around 11 o’clock and jumped on a boat to Unicorn Island – our first main stop on the tour. At the Island we were greeted to banana wine, banana chips and honey tea (which I ended up sharing with a wasp or two…) I know that honey isn’t vegan but I’m still ok with using animal products if it doesn’t harm the animal (for now). 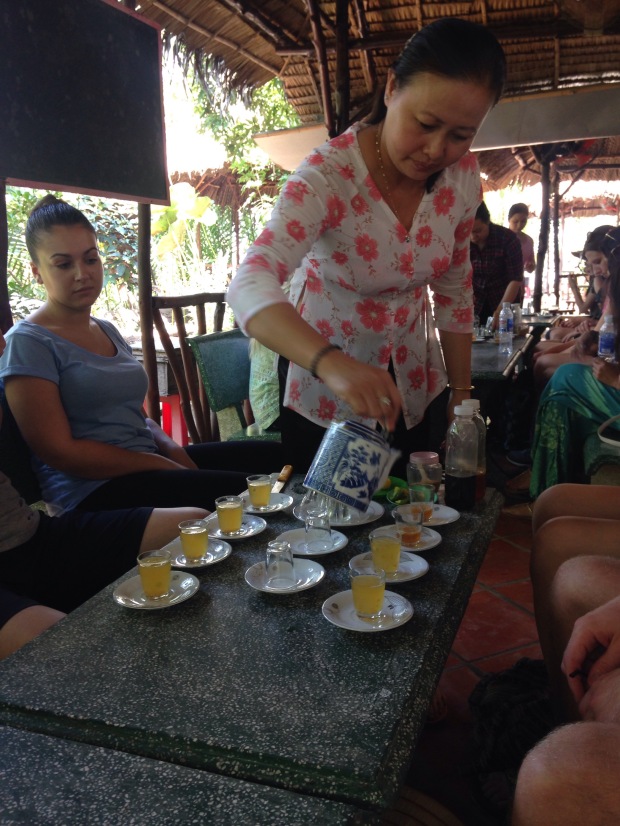 After the honey tea a giant anaconda snake was brought out for people to take photos with. The poor snake was kept in a tiny cage and passed around within the group for selfies. I don’t know if it’s hypocritical for me to see this snake being used for entertainment in a different light to bees being used to make honey but the sight of the snake was really horrible. Not only had it clearly had its teeth removed so that it wouldn’t bite the tourists but it was almost dropped on numerous occasions by squeamish girls and guys alike. Once it had served its purpose it was merely put back into its cage until the next group arrived and more photos were needed…

We then walked back down the river and climbed aboard a small boat being rowed by two men. We went in groups of four and were given hats to wear for the duration of the boat tour. The whole experience was really cute! We rode the river along for about 10minutes through a tunnel of beautiful coconut trees. The tree bark twisted up from the river and the coconut flower looked really different to the coconuts which grow inland! 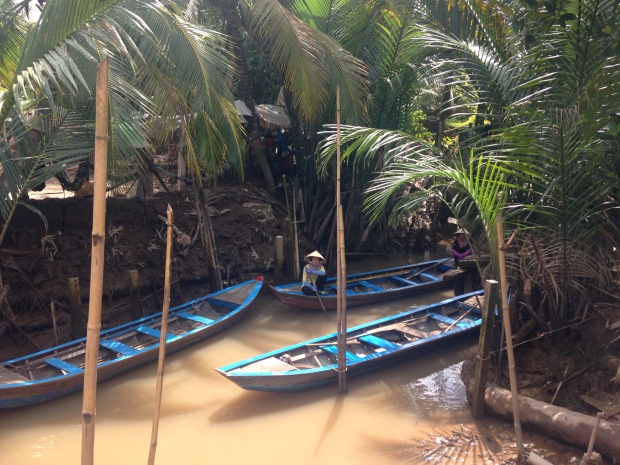 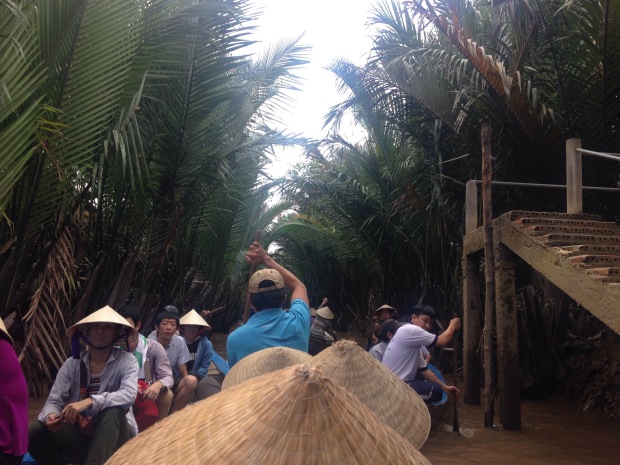 After our ride we walked a little bit further across the island and stopped for a fruit platter and a show. The fruit had we were given was grown locally so it was great to try the different fresh flavours; mango, pineapple, rambutan, dragon fruit and papaya (which I really don’t like the taste of….)

After our snack we were driven by horse and carriage to where we would be eating lunch. I didn’t actually feel comfortable taking this ride because the horses didn’t look particularly well looked after but didn’t know what to say to the guide about it so just got on board. Thinking about it now I shouldn’t really have honey anymore because it’s basically the same thing…. 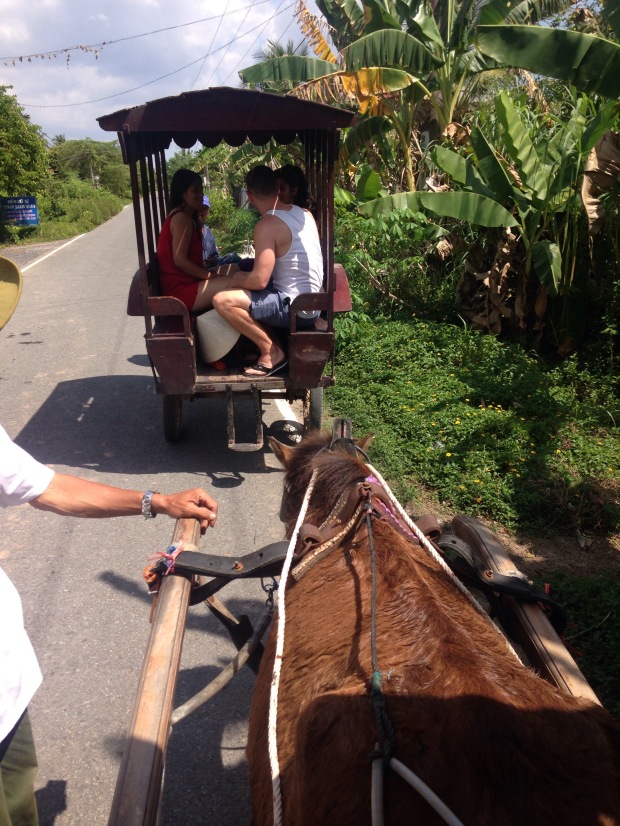 Another not so nice thing happened before lunch. We were shown how Vietnamese traditionally catch fish from the river. They place a bamboo cage into the water and then feel around inside the cage to see if they catch anything.
Although it’s evident that you don’t need to eat animals to survive the world would be a lot better place if hunters went back to older hunting techniques. Hunting only for themselves and their families to compliment a plant based diet rather than the vast factory farming practices that now appear the norm to the western world…

For lunch we were served either pork or tofu (it’s obvious which one I went for) with rice and green beans. We were then served sticky rice wrapped in banana leaves. I’m still not too sure what I think about the sticky rice, it’s really stodgy and quite sweet but it didn’t taste bad!

After lunch we got back on the boat and made our way to tortoise island where we were taught how to make the coconut candy this part of Vietnam is famous for. We saw how the old coconut would be split open, drained of the water (disposed of because it’s not sweet like the young coconuts), the flesh shaved and then put through a series of machines until the coconut candy was created. It was really fascinating but the only downside was that malt was added at a later stage so it stopped it being vegan! 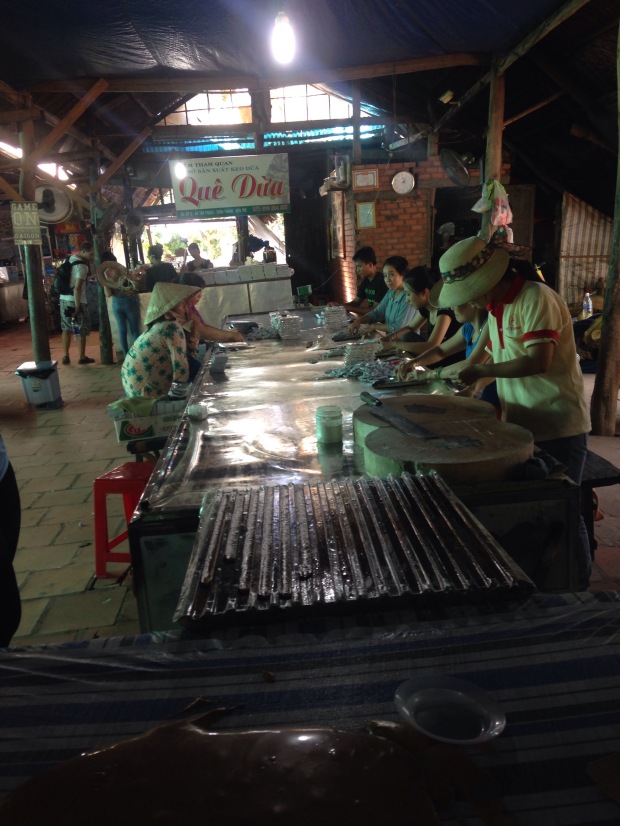 After walking around the coconut candy factory a little we got the boat back to the mainland and made our way back to our hostel on the tour bus.

The little islands were really beautiful to walk around and it’s trip that I would definitely recommend to other people- it’s just a shame about the snake and horses!

Vegan/ food in the city
I was really worried about eating in South East Asia when I left England a few days ago! I know that it’s possible to live on fruits and rice for a long time but I have to say I really wasn’t looking forward to that. And luckily I don’t have to!

Unlike China most Vietnamese people that we met in HCMC spoke really good English and the menus all have English translations, as well as clearly marked vegetarian dishes!

I had the coconut and vegetable curry my first night in Vietnam and it was delicious! I’ve also had what may be the tastiest salad that I’ve had in a long time – lotus root salad. It was delicious! Honestly if you ever get the chance to try it, do so!

I’ve even got to try a famous Vietnamese street food called Bhan Mi. It’s basically a baguette filled with lots of different ingredients – mainly meat or eggs as well as salady bits, but quite a few of the stalls sell it with tofu too! The tofu option is even cheaper that the already cheap 15dong standard bhan mi (the tofu one is 10dong).
There’s also lots of fruit and smoothie stalls dotted around the city throughout the day so you never have to go hungry for or long!

Running in HCMC
I’m trying to maintain my running fitness whilst being away and it’s actually got off to quite a good start in HCMC. There was a park opposite our hostel which was around a 1km loop so it was easy to keep track of my mileage – even though my suunto watch tracks it all for me on strava.

I went for a few evening runs whilst in HCMC because the climate was really hot and humi. The parks are packed after dark with lots of local people playing games and dancing (similar to china) so they provided me with a nice distraction whilst I struggled on my run….