At Psycle the lights are low but the music and energy levels are high!

On Tuesday morning I attended a 7.30 am X Psycle session as part of their collaboration with Nike’s #traintuesday event.

Although i’d planned on arriving at the center 20 minutes early so I wouldn’t be rushed – keeping true to form – I got a little lost walking around Canary Wharf…. I ended up walking down the escalators to the Psycle centre just as the class was beginning.

After signing in, changing into cycling shoes provided by the centre and picking up a water bottle I was quickly ushered into Studio 1 for my 45 minute class.

One of the members of staff helped me on to the bike, clipping my shoes into the bike peddles as I’m a newbie to all things spin, and handed me some dumbells (to be used at a later stage in the class).

I assumed that the class would be mostly focused on spinning, as the name Psycle permits, but was pleasantly surprised as soon as the class started. Instead of just alternating the intensity of which you peddle throughout the class, we were led through a serious of complete body workouts whilst on the bike! Within 15 minutes of the class beginning we had been doing versions of press ups, ab crunches and even squats, all the while continuing to spin.

The music was great to get your heart pumping and the dimmed lighting made the whole session feel like the it wouldn’t be out of place in a club in London. It was a good thing that the lights are turned low because my lack of co-ordination really showed throughout the class. When Alana (the instructor) told us to stand up and then sit back on the bike seat all the whilst spinning, it took me a good few minutes to get into the rhythm. I was trying to keep in time with the calls for ‘right,left,right,left peddle’ but my body wanted to move to a different beat….

We only followed one routine for a few minutes before it was switched up again to work a different part of the body. Although each move took me a little while to get used to it was great because I got a full body workout as well as keeping my focus in the room (following what everyone else was doing and trying not to fall off of the bike…)

The majority of the session was focused on different variations of spinning but towards the end of the class we picked up the dumbells and worked out our arms and abs- still spinning our little legs away! 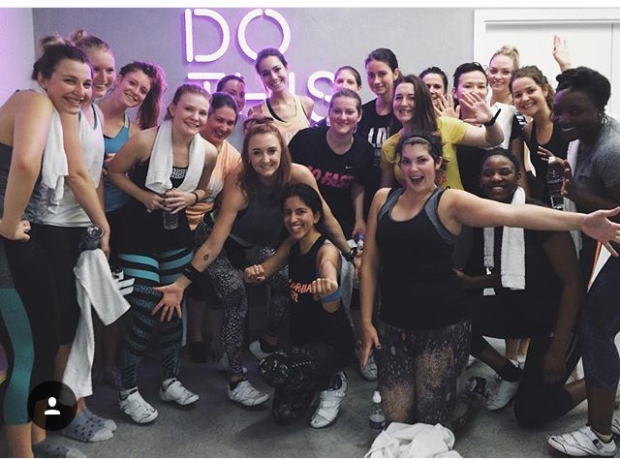 Although my arms felt well and truly worked by the end of the class, and I was nice and sweaty, my legs weren’t as worked as I expected/ hoped. I’m not sure whether or not this was because I didn’t turn up the resistance enough on the bike, or because I was slow to pick up the different routine changes (or I may just be fitter at the moment than I think…) but I was expecting to feel the burn in my legs a little more than I did.

I do love the NTC elevated sessions because it gives me a chance to mix up my cross training and try out something completely new like this Psycle session. I was given a free pass so will definitely be back to try another class soon!