The simple luxuries in life: a 7 hour soft sleeper

It’s crazy how excited we were to be having a soft sleeper for our overnight journey to Datong. The 16 hour hard seat to Xi’an a few weeks ago really made us hesitant for another over night journey but the thought of being able to sleep through a relatively long journey, coupled with saving money on one nights accommodation encouraged us to try again….

We left Pingyao just after 9pm, swapped trains at Taiyuan and ran to catch our train to Datong – only having enough time to buy a bottle of water each from a vendor on the platform before the train departed at 1.30am.

When we boarded the train to Datong the cabins were in complete darkness.We searched for our beds in the dark, looking out for our bunk number on the small illuminated block in between the beds. Although the bunks were pretty cramped and not the cleanest they were actually OK!

We chose to have the bottom bunks when we booked our tickets so we would be able to have our belongings close by us. The bunks were a little coffin-esque but after taking off the dirty duvet and pillow, laying my own duvet cover on top of the mattress, it was pretty comfortable. It was great that the lights were already out as well so we were able to lay down in the darkness and try to get some sleep.

We weren’t sure what the security would be like on the sleeper train so we slept with our money belts containing our valuables strapped to us for the first time for our journey through China. Although we were using my phone as our alarm clock so I slept with it tucked down my bra… something that was surprisingly comfortable…

We arrived at Datong at 5.20 in the morning to a deserted train station and walked to the hotel we’d booked specifically for it’s early check in and close proximity to the station. Within 30 minutes (of me leading the way and getting Leah and myself a little lost, clambering over a building site with our rucksacks…) we were checked into our hotel room and crawled into our huge double bed to try and get a little more sleep.

By 9am I was up and awake again, my body clock being annoyingly stubborn and not letting me fall back to sleep. Instead I loaded up my gps and went for a run. I intended to run to the river but turned the wrong way as soon as I left the hotel and ended up on the highstreet. Being Saturday morning, the streets were full of markets stalls with their customers gathered along the sidewalk, bargaining over the fruit and veg that was on offer. My legs were feeling pretty loose after cupping but after a short while dodging pedestrians I was getting tired and my breathing was becoming a little more strained. Datong is a famous old Coal Mining town and the high levels of pollution was becoming a little more obvious the longer we spent there.

Returning to the hotel a little later, Leah was already up and doing her washing in the hotel sink. We both realised how lacking we were in clean clothes so ended up hand washing our clothes for over an hour, leaving them to dry on a clothes line, tied from the the towel rack in the bathroom to a clothes hook across the room. By the time we were ready to leave the room for the day we had to do a lot of ducking and diving to get through the soggy clothes above our heads… 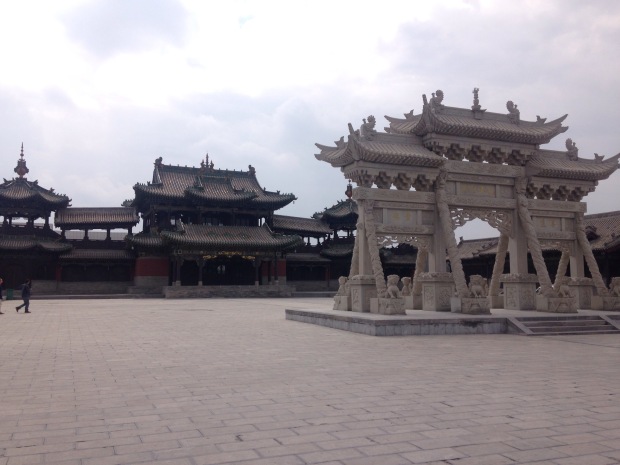 We’d read that Datong’s Old Town had undergone a multi-million pound renovation recently (50 million yuan) so headed to that area for lunch. By the time we reached the city walls of the old town it was almost 12.30pm so we thought that the area would be buzzing with tourists and locals awaiting their lunch… the whole place was deserted! The streets were lined with fancy shops but not any customers (which seems to be a recurring theme in China) and finding somewhere to eat for lunch was a struggle. We ended up in a small cafe, with me buying a bread roll to eat for lunch and Leah ordering noodles. The cafe was situated on the edge of the large square by the antiques market and had a constant stream of customers, even with the limited amount of people around!

After lunch we visited the famous Nine Dragon’s Mural (one of only three still standing in China). We had a little photoshoot in front of it with a group of Chinese tourists and actually managed to get one with just Leah and myself in! 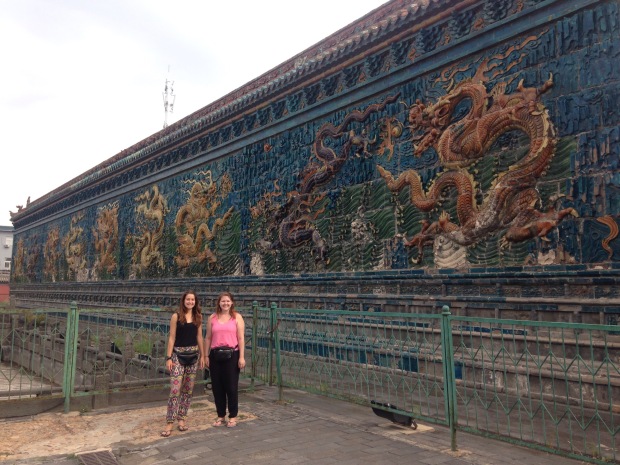 Although it was a really nice day there wasn’t much to do in the town so we headed towards the river front to sit and chill looking out at a nice view. We bought some fruit along the way and sat watching children playing on the river bed while we ate.

The sky became grey after an hour or so we headed back to the hotel and made it back into our room just as it began to rain.

Wading through the river for chocolate (yes we know it was irrational!)

After being back in our room for a few hours I was getting really bored and eating basically everything I could get my hands on…. nuts, fruits, seeds, bread, you name it, anything that was in our hotel room, edible and vegan, I wanted to eat it. Leah had a pretty bad cold so was happy chilling in the room but I needed to get outside!

We walked to the train station to buy our tickets to Holhot (our next destination) but our designated queue – for anyone foreign – was huge and was barely moving. After waiting for an hour with only three being served we left in search of dinner, planning to come back later in the evening.

We knew that there was a restaurant recommended by lonely planet near by so even though it was raining a little we walked into around surrounding streets, looking for dinner. Within five minutes it had began pouring of rain! We ran into one restaurant ready to eat anything that would warm us up…the only thing that they had was meat and cold vegetables! 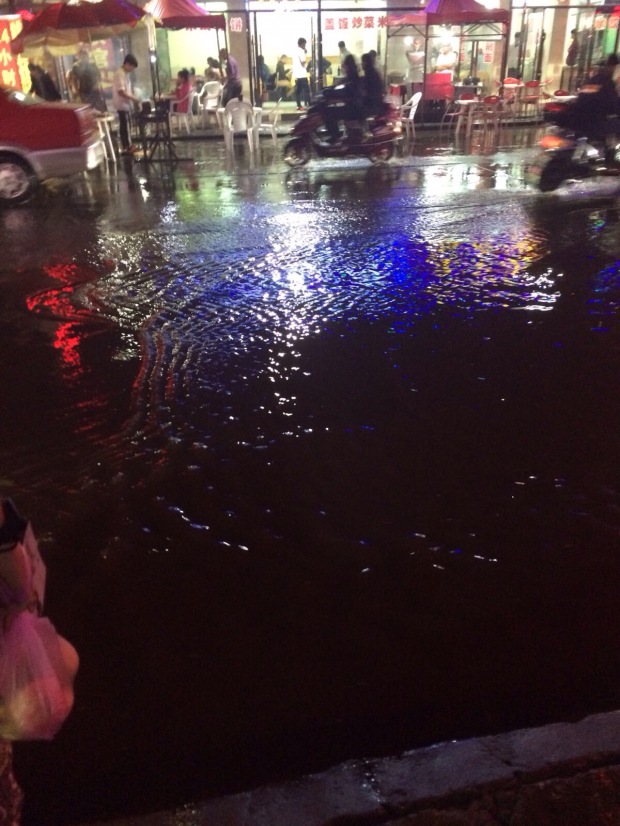 I don’t know how we managed it but somehow we spotted dumpling pans in the restaurant windows across the road- through the curtain of heavy rain that was now falling and had begun filling up the road – so we pulled up our trouser legs and walked through the huge puddles that were now forming (in our flip flops).

Although we were soaked through by the time we reached the restaurant, the trek to the dumpling place was worth it. They even had vegetable dumplings for me! And after a little miscommunication, coupled with Leah searching through their fridge, we even managed to get a plate of green beans to go with our dumplings! 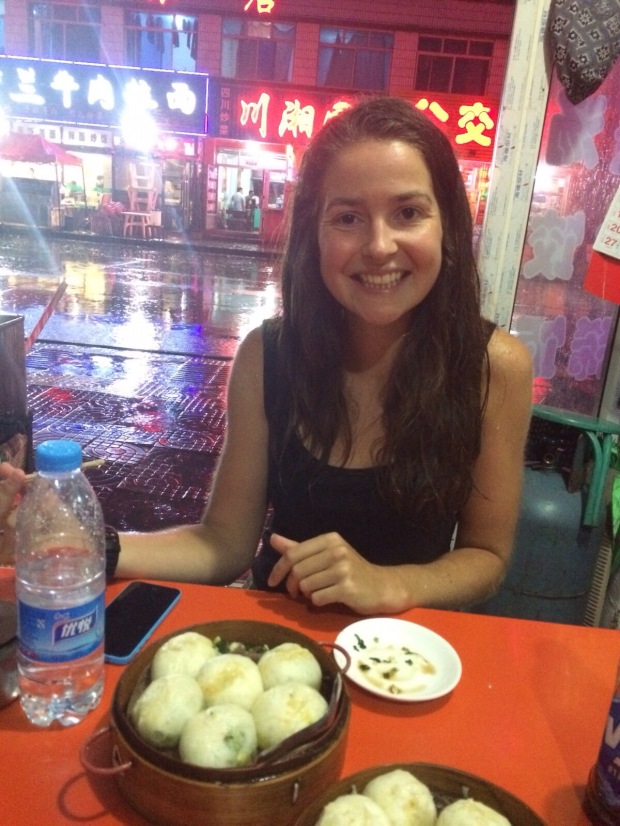 Our hotel was a good 15minutes walk away, across a building site, so we planned to jump in a taxi after buying out train ticket to Holhot. Before heading back we wanted to get some chocolate to take back to our room and literally waded back and forth across the now overflowing road, checking out near to ten different shops, with no luck. By the fourth shop we knew that we were being silly to keep searching but a little voice in our head told us that maybe the next one would have it…. there was no chocolate in site of the whole of Datong!

Cold and wet, we gave up our search and went back to the train station to buy our tickets. Unlike when we arrived the previous night, the train station was still really busy! After 30 minutes more of queuing we had our tickets and headed back into the rain to join the queue for the taxi.

On route Leah tried one last shop in our search for chocolate and she actually managed to find milk chocolate (for her) and dark chocolate (for me). We weren’t even hungry anymore but the euphoria we felt once that chocolate was in our hands, unopened, was crazy… 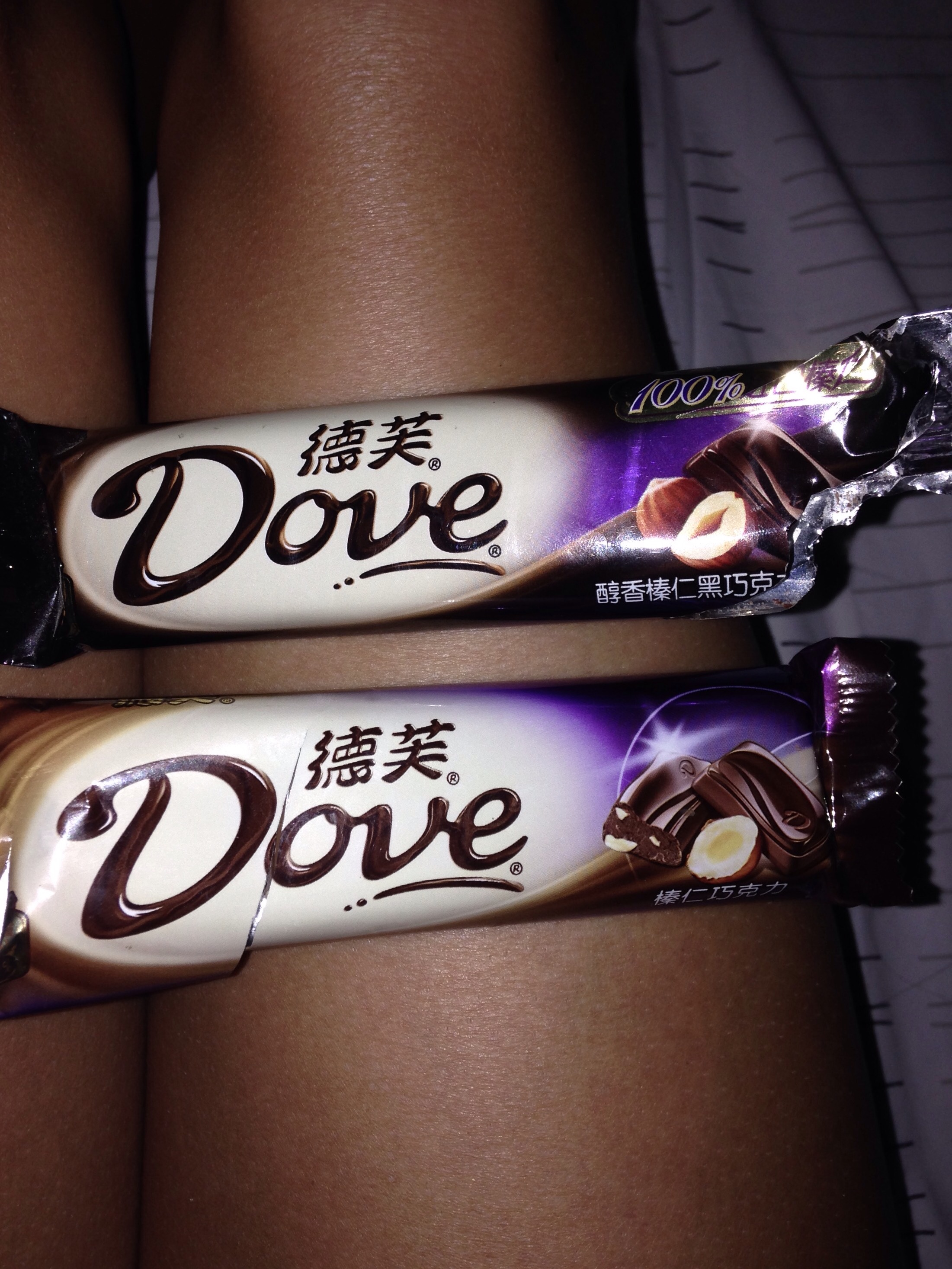 They lasted until the following afternoon…