I started my day at 7.30am by going for a little run. I realised last night that to complete my goal of running a half marathon in every country that I visit (we leave China in a few weeks) I needed to get back into my training. Today I planned to run 4/5km…

I thought I knew where I was going so didn’t take my phone with me. I ran past the mosque we visited yesterday and carried on along that road until I reached Binjing park. I’d planned to stop here (2km from the hotel) and do a quick circuit in the fitness centre in the park.
After passing a large group of people ballroom dancing outside of the aquarium I ran around the fitness area looking for some bars to workout on. The fitness area is huge here! Not only did it have lots of equipment but there were also basketball and tennis courts, as well as table tennis tables and stages where people were dancing!

I did my little workout whilst watching the numerous sports that were in play around me. After finishing off with a few burpee- pull ups, I took what I thought was the exit closest to our hotel street. Obviously, with my sense of direction, it was the wrong one…

I ended up running in the completely wrong direction, adamant that I was going the right way, so I didn’t want to turn around and run back along my earlier route. After running a few kilometres and still not coming across anywhere I recognised I finally realised that I was a little lost. I still thought that I knew the general direction of the hostel so headed down streets in the north-easterly direction.

After another few kilometres I accepted the fact that I didn’t have a clue where I was. I wouldn’t even be able to make my way back to the park because I’d taken lots of different roads, hoping that they’d bring me to somewhere that I recognised. I stopped and asked a few people for directions to the drum tower (opposite our hotel) or book street (where I could direct myself back from) but they didn’t understand me and without my phone I couldn’t use the translator. One guy on a fruit stall gave me his phone but he just wanted to add me on wechat and not actually help…

I even went into a 7day Inn with the hope that someone would speak English. I had ¥5 with me so thought that I might be able to get a taxi to somewhere that I recognised with a little help. After drawing the drum tower roundabout and book street, as well as miming the ‘dong’ of the drum, I was no closer to getting back to the room.

I still vaguely thought I knew the rough direction of the hotel so carried on towards the North-East. I really don’t know how I managed it but after running for over 90 minutes I somehow managed to find my way back to the Mosque! I’d come from the completely opposite direction that I thought I was running in but I made it back!

I’d said to Leah that I was only going on a quick run (20minutes) so she was really worried when I rocked back up 90 minutes later!
We’d also planned on walking to Longting Park this morning but because of my unplanned long run we jumped in a taxi instead.

My run had made me really hungry and my fruit breakfast just really wasn’t satisfying me quick enough. We weren’t sure what the food situation would be inside the park – going on previous experience there wouldn’t be any – so bought a breakfast wrap each from a food vendor down a side street.

We went back to the main entrance of the park and bought our tickets (¥25 – student entry) and walked along the pathway to the foot of the Dragon Pagoda. The Pagoda was set in the middle of a huge lake and the pathway was lined with lanterns and flowers over head so it was a really nice walk. 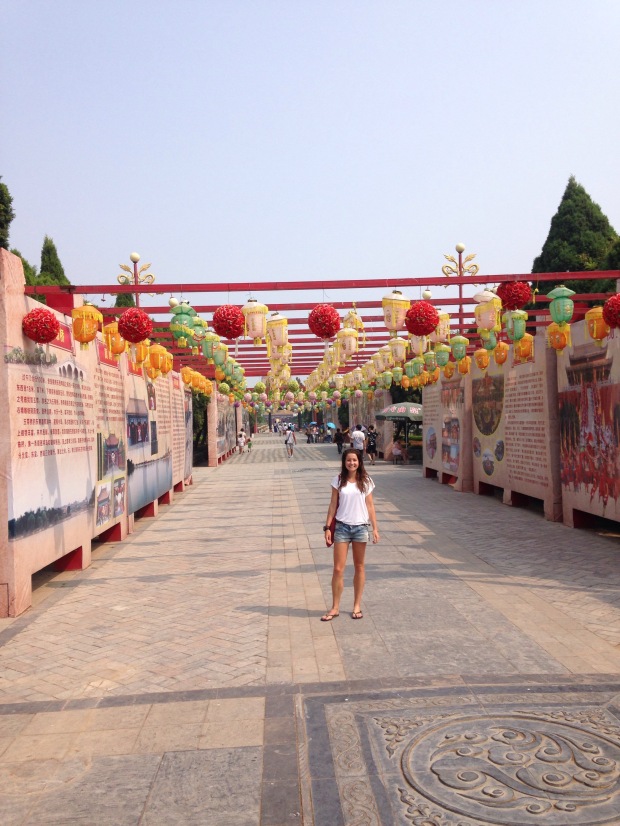 From the top of the Dagon Pagoda we could see and then smell incense burning in the park surrounding the Pagoda so we down to investigate.

There was a huge shrine surrounded by the odd stick of insense as well as thousands of golden objects. The golden objects looked like paper hats and were being made nearby by women sitting under the trees. They seemed to have significance to what the shrine was celebrating but it was lost to Leah and I. 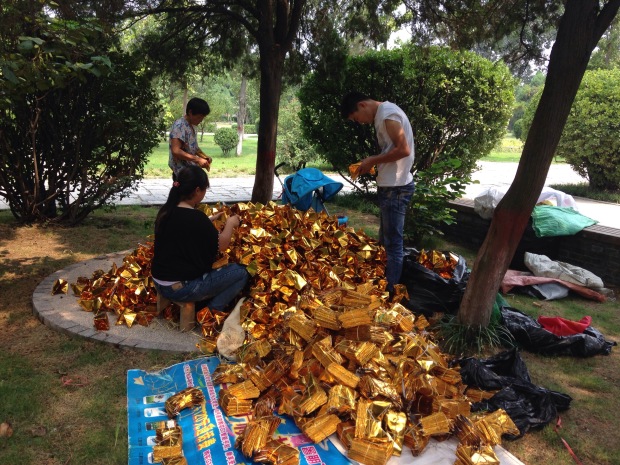 After trying a new fruit that we’d bought last night – and learning the hard way which bits are edible (not the pink bit) we went for a bit more of a wander around the park.

There was so much grass!

We couldn’t resist but whip off our flip flops and give our toes the grassy texture that they’ve been craving! Even once we’d left the grassy patch I refused to put my flip flops back on because even the pebbles and concrete underfoot was a welcome change!

We sat down on a shaded part of the pathway, putting our feet back on a the grass whilst we people watched. A women came over and sat beside me and spoke to me in Chinese solidly for a good 10 minutes. Pausing only to laugh at the confused expression on my face coupled with my futile attempts to explain that I didn’t understand Chinese…. She moved onto writing notes for me on a bit of paper (still in Chinese) hoping that it would make more sense – it didn’t. 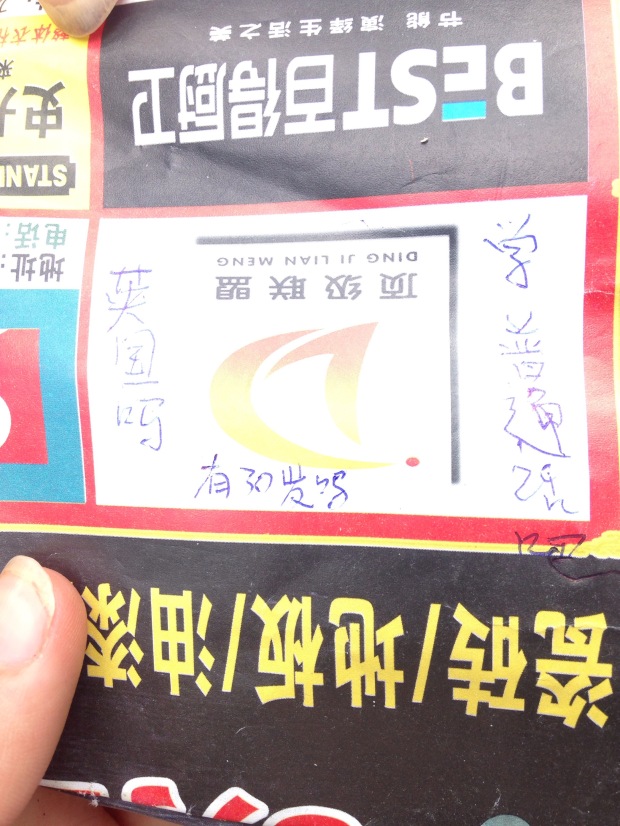 Two friends joined her after a while and just stood watching us. It made us feel a little awkward because we couldn’t communicate so swiftly exited the park.

We managed to order a deconstructed salad for lunch today!

We found a food court and tried to explain that we wanted all of the ingredients of a soup (spinach, edamame beans, tomatoes and bean curd strips) but without being cooked (liang).

After looking at us a bit odd they understood our request and took us to the kiosk in the centre of the food court to pay. We didn’t realise but you had to top up a food card to buy anything in the food court so we had to get one of these to buy our lunch.
Our lunch was ¥26 so I handed over a ¥50 note and was given back a food card with no change. The women in charge had topped up the card with my ¥50! After trying to explain that I just wanted enough on the card to pay for lunch – as we wouldn’t be returning to this part of China – I was given my ¥24 change.

The salad was actually worth the cuffuffle to pay. It was fresh, tasty and cold! 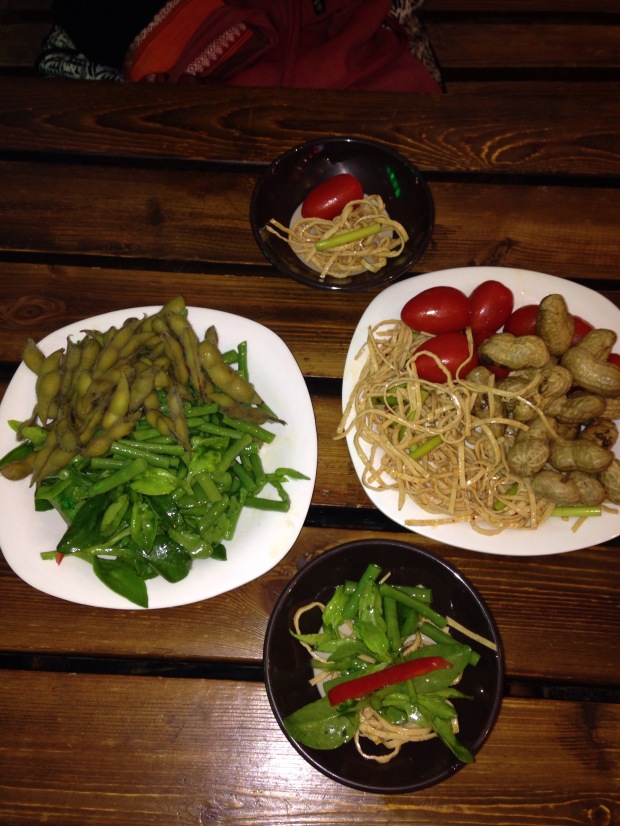 After lunch we walked to the main bus station (over an hour away!) to buy a ticket to our next destination – Zhengzhou – where we could visit nanjiecun, an old styled communist area. After speaking to a really nice English speaking women at the customer service desk, we bought a ¥7 bus ticket which enabled us to get on any bus to Zhengzhou tomorrow (there was a bus leaving every 10minutes!).

By 6.30pm we were back at our hotel and ready for dinner. Although the salad was nice earlier it wasn’t exactly very filling….

We headed to Gulu night market – a 5 minute walk from our hotel – which looked really busy when we passed it last night on our way home. Tonight however, it was empty! Most of the vendors hadn’t even set up their stalls yet! We forgot that a ‘night market’ probably wouldn’t open until late.
One selling tofu and plum sauce spring rolls was open and had a really big queue so we got in line and sampled one as a pre dinner snack. 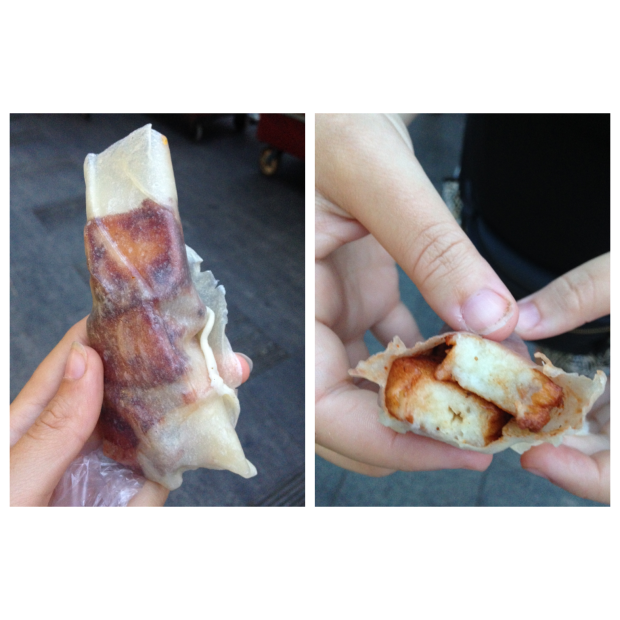 It was really good and fuelled us to look around the market stalls that were already set up. Leah tried four times to buy socks off of a stall but kept getting completely over charged (1 pair for ¥5 when everyone else was getting 3 pairs for ¥5), finally finding a more honest vendor who charged her a decent price!

By 7.30pm we hoped that the food vendors would be out in force, like we witnessed last night, so headed back to the main area. There now wasn’t one vendor without someone queuing for food!

I bought a pot of tofu from one stall (I’d seen it on a few stalls last night and it seemed really popular), grilled vegetable skewers from another (which leah and I shared) whilst leah bought meat skewers off of a different vendor. We sat down at the seating area attached to our vegetable stall and tucked into our food. All the food was really tasty, there wasn’t any left on our plates! 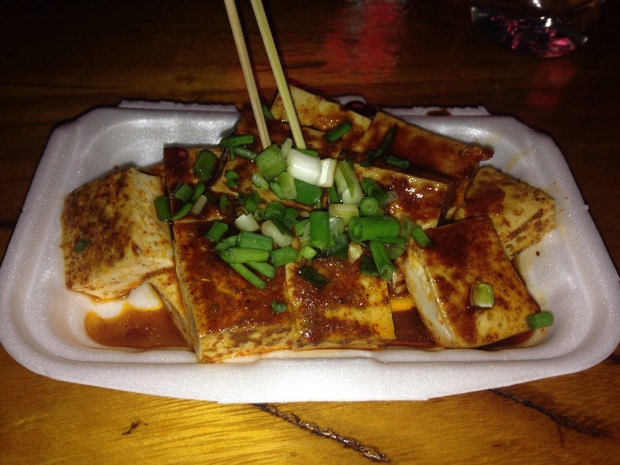 We’d read in our lonely planet guide that there was a Tsingtao (our favourite Chinese beer) stall in the market. After failing to find it after dinner we bought a bottle each from a shop nearby. We wanted to drink it in the market atmosphere so sat down at an empty table and bought a naan bread from a stall to share.

A vendor came over with a fish menu and after we refused to buy anything he told us to get off of the table…Motioning us with his fingers to walk away.. All the seats in the area were empty so it wasn’t like we were taking up any potential customers spaces (if anything we would probably attract customers), plus we’d bought a naan, so we sat where we were as he continued to shout at and heckle us.

After finishing our beer and naan – a lot slower than usual because we were being stubborn now – we left for another food stall. We’d read that almond tea was a famous dish of the region so we sampled if from a nearby stall.

Almond powder is combined with hot water from a huge cauldron to make a thick paste. The paste is then topped up with sweets, nuts and fruits. We only shared one cup luckily because it was a lot sweeter than we could have imagined!

The vendor was really nice too, he showed us to an empty table by the stalls (up- yours- horrible- fish-vendor) and kept trying to make conversation with us with our broken Chinese and his broken English.

2 thoughts on “Barefoot at the Dragon Pagoda (Kaifeng) ”