I couldn’t resist any longer. I just had to get out and go for a run….

I woke up at 5.45am this morning to catch the sun rising as I ran. My foot was a little sore from all of the walking yesterday but I almost NEEDED to see the sun rise over the mountain ranges, feel my breathing change with the altitude and the burn in my legs from running up and down the hills.

I was told the other night that a few of the Kung fu schools begin their practise before sun rise so I was really interested to see how many people were awake and working out at this time in the morning.

It was really misty when I set off but the streets were already dotted with boys in their grey uniform. As I ran down the hill I saw more and more groups appear, running towards me in their legions, row by row, one behind the other. It was dreamlike the way they just appeared all of a sudden!

In contrast I was running in a bright print top and shoes (and black shorts) so they could most likely see me coming from a mile away….

Unfortunately the mist didn’t really clear by the time that I had to head back to the hostel room. I still needed to attempt to shower and pack my rucksack a little, ready to be in a taxi by 7am to catch our bus on time….

Bus to Kaifeng: police and crocodiles…

We made it to Denfeng bus station 40minutes early and were bumped forward onto an earlier bus – leaving the station two minutes after we arrived! Men came running at us shouting ‘Kaifeng, Kaifeng’ as they grabbed our bags and herded us to the last two available seats…

The smell of the bus actually makes me feel a little sick to remember (like cheesy feet and poo combined) but somehow both Leah and I managed to fall asleep pretty quickly. About half way into the journey we were woken up by a ticket collector standing next to our seat with two police officers checking the bus. We didn’t have a clue what was happening!

We were so disorientated that we handed the police officer both our bus ticket and passport and only grew sceptical when he got off of the bus with both documents in his hands! We jumped off the bus – grabbing our day sacks as we exited – chasing after the police officer. We were only thinking about being stranded along the side of the road without our passports, let alone losing our large rucksacks that were being stowed below the bus!

Luckily it was all legit and we were actually at a security check point where the police had to check all foreign travel documents!

Once we were allowed back on the bus I made sure that I stayed awake for the rest of our journey. I even almost managed to watch a movie being played about a killer crocodile which broke out of a crocodile farm and started terrorising the town. I say almost because the screen kept going blank and the voice over was in Chinese so I missed the last 15 minutes of the movie – I’ll never know if the police officers son and girlfriend survived….

After getting a taxi to our hotel from the bus station (¥7) we checked in and then went out to explore the town. We were a little earlier than expected due to getting on the earlier bus so we took a gentle stroll to the Mosque.

On route we stopped for lunch at a really busy food stand along the side of the road. The noddles were freshly made and cooked in front of us, and the extra veg that we ordered was delicious. We ate our lunch in the seating area attached and surprisingly found the low seats really comfortable! 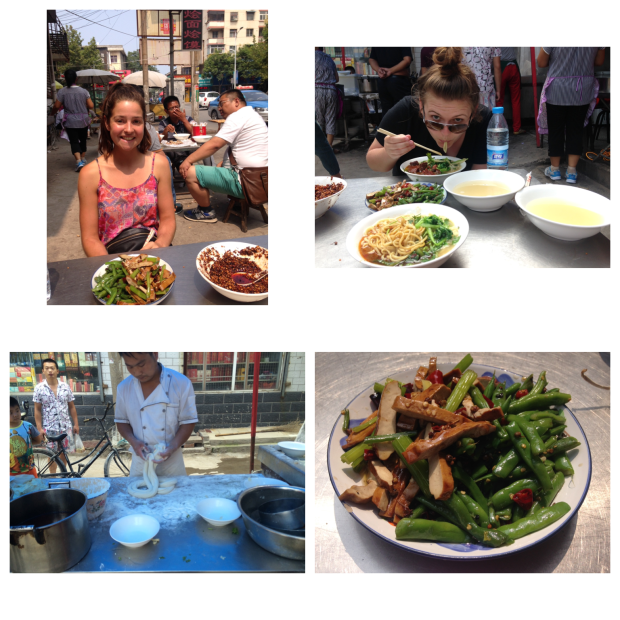 We thought that we’d missed the Mosque but saw some men wearing Muslim hats walking down a side street. We followed them past a row of food stands selling spicy nuts, dried meats and desserts, and found the mosque about half way down!

After walking inside we quickly left. Not only did the whole place smell of pee but we were also told to leave because we weren’t adequately dressed (I was in shorts and a T-shirt so my knees were uncovered).

We stumbled upon a little museum after exiting the Mosque. We turned down a side road and saw a poster hanging on a metal gate outside with the doors to an old fashioned house wide open. After peeking inside the Doors we could see large scale photos hanging on the walls so guessed that it was some kind of museum. After walking around a little and putting together the sparse English translations and photographs we realised that it was a museum and show home for a guy during the cultural revolution!
Although a lot of the rooms were empty the style of the architecture was really interesting to observe.

After our unexpected museum visit we walked to ‘book street’. Book street was full of old fashioned shop fronts which housed a few traditional as well as more modern shops. We even found an actual Chinese coffee shop with decent prices and English translations! If we weren’t still so full from lunch we would have definitely paid the waiter a visit!

All of the grassy areas in China seem to be private parks which you have to pay to enter. We thought we found one on our Map app but when we got there it was surrounded by a huge wall! Instead of laying on the grass to write our journals we sat at a pagoda alongside a nearby lake.

We sat there for hours, writing, as well as watching swimmers in the lake. One of the swimmers got out of the lake and told leah to sit in the shade to protect her skin (he’d clearly given up on mine…) and asked her what swimming strokes she could do. We think that if she had her swimming clothes on he would’ve definitely challenged her to a race!

It was still early afternoon by the time we stopped writing so we went for a walk around the lake before looking for dinner at the night market. We walked under a few bridges, stopping at the little parks along the way, and across a few roads, always following the river, and somehow managed to end up over an hour away from where we thought we were!

We couldn’t even get in a rickshaw/ taxi because we didn’t know the address of the night market (where we’d planned to have dinner) in Chinese or English so carried on our walk.

We finally reached the night market about 7.30pm so at least we’d worked up an appetite before hand!

The night market consisted of a street by the river full of food stands and people. The road was closed to cars but there were still a few people riding bikes up and down the strip.

The food all looked really good – as street food usually seems to in China- so after checking out most of the stalls Leah and I decided to try a few different things. I bought vegetable stuffed naan bread from one stall and sat down in the seating area attached to our next stall which we bought a few grilled vegetable dishes from. Leah bought a plain naan and grilled fish off of the stall next door, then came to join me at the table.

Ordering vegetables in China is a really annoying experience. They don’t seem to mix and match here, instead everyone gets a whole plate of one vegetable. So because we wanted a variety of vegetables we ended up with a lot of food which we were too full to eat!

After our second very filling meal of the day we began our walk home; past the fairy lights lining the lake edge and people singing karaoke. We were about half way home when we realised that we’d left our bag with our journals back at the night market! Luckily the stall owner realised and put it aside for us so after running back we were able to collect it. There wasn’t anything worth stealing just our journals which have sentimental value…

Health and safety in China

We got back to the room about 9pm and put on the air con to cool down the room a little. After a while we noticed that there was a really funny smell in the room, at first we thought it was coming from the drain in the bathroom but noticed afterwards that it was actually coming from the air con. We turned it off and the smell stopped.

After about an hour we turned the air con back on – I love a cold room when I sleep – but after a short while the smell returned. In the mean time I developed a bit of a bunged up nose and Leah had a headache so we opened the window to air out the room a little.

They didn’t have one so we asked to be moved rooms just encase. By now it was past midnight and although we were tired we did actually want to wake up in the morning….