Politics along the city walls

On Thursday (August 20th) it was Chinese Valentine’s Day…

To celebrate Leah, Rudy and I had a three-way date walking along the city walls of Xi’an. 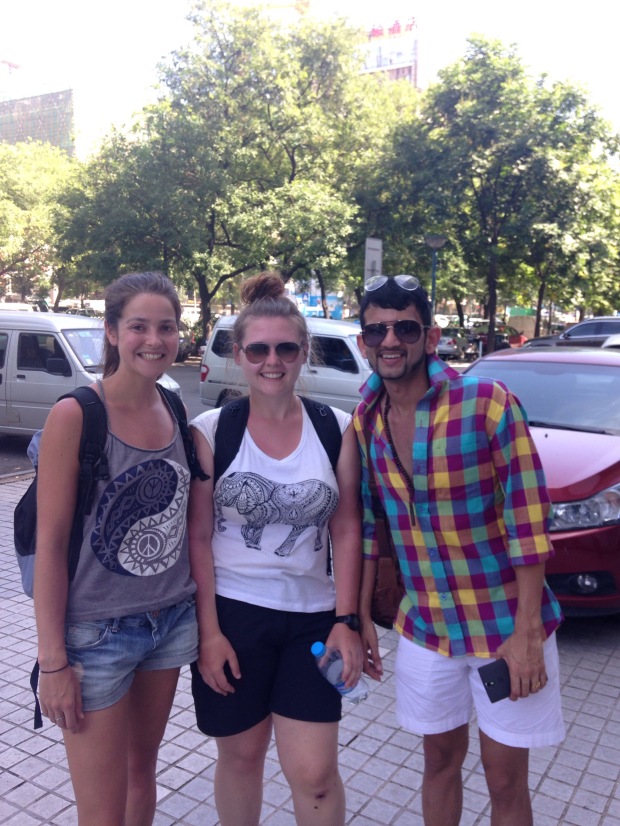 We met Rudy (a homosexual Indian teacher who studied in Germany) the night before in our hostel and invited him on our little morning stroll (14km along the wall plus 4km walking to and from the wall entrance…). 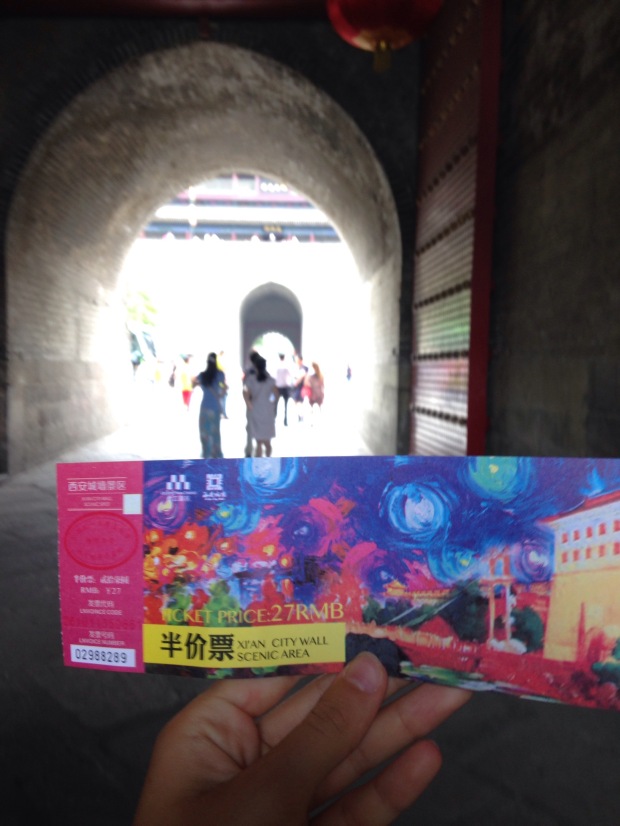 The walk was really interesting but that was largely due to the company we had rather than the views from the wall itself. It was pretty difficult to look over the high walls that enclosed the pathway- we had to keep walking either side of the path to catch a glimpse of the path that ran around the walls below.

The conversation that we had was really interesting though! We were told all about India and how Rudy’s view of the traditional and political elements of his culture changed after he studied in Germany for a few years and then returned home.
We spoke about the gay rights movement that is happening around the world at the moment and also how the stigmas attached to it are still really prominent in India. We were surprised how openly gay Rudy was as all of his family and friends know his sexual preferences and his family seem to have fully accepted him. From this we assumed that his family would be pretty modern in their approach to culture but Rudy’s sisters had been married off at a young age, one had run away from two husbands…

We even spoke about even more controversial topics such as religion, fate and divine intervention. In most religions it is illegal/ frowned upon to be homosexual. Leah and I still aren’t sure where we stand on the whole subject. I like to have scientific explanations for most things but I do believe in fate and that the decisions we make in life are made for a reason- what is meant to be will be. Rudy still believes in a god but doesn’t necessarily follow a religion… He also recommended a book for me called ‘Life is long if you know how to use it’ by Seneca, after we discussed Ekolt Tolbarts book ‘The Power of Now’ which is about living your life in the present – the past has already happened and its your present which shapes your future!

After completing our city wall circuit we disembarked and walked to the antique market nearby, stopping for food along the way. We somehow stumbled upon a little fake village with lots of food stalls set up. Leah and I had been saying earlier in the day that we wanted a salad wrap for lunch (something that is really difficult to find in China!) and there was stall selling it! 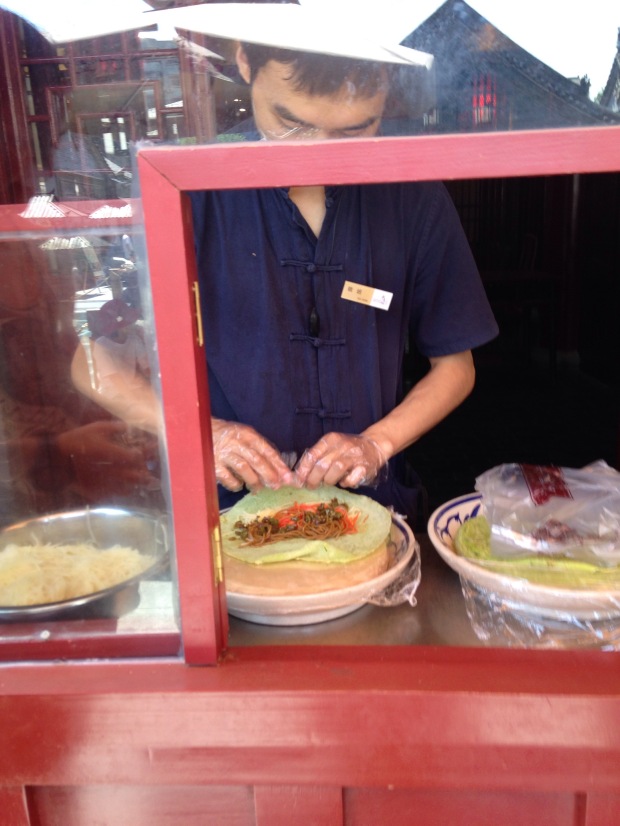 The antique market was a really odd experience. It was full of products and vendors but not any customers. We’re not sure if it was because we were there around lunch time but most of the vendors were asleep in their chairs and didn’t actually seem like they particularly wanted any business. We had free range to wander throughout all of the stalls without being hassled and came across some really interesting pieces. There were lots of stone carvings- we particularly liked the sculpture of Mao with a cross hanging around his neck- and its inspired me to make some stone seating for my garden back in the UK (hopefully my parents won’t mind…)

After the market we stopped by another food stall on the way home and bought a snack each. Leah and I shared a chilli, onion, chive and mushroom flat bread and Rudy bought one of the pulled pork rolls which seem really popular here! 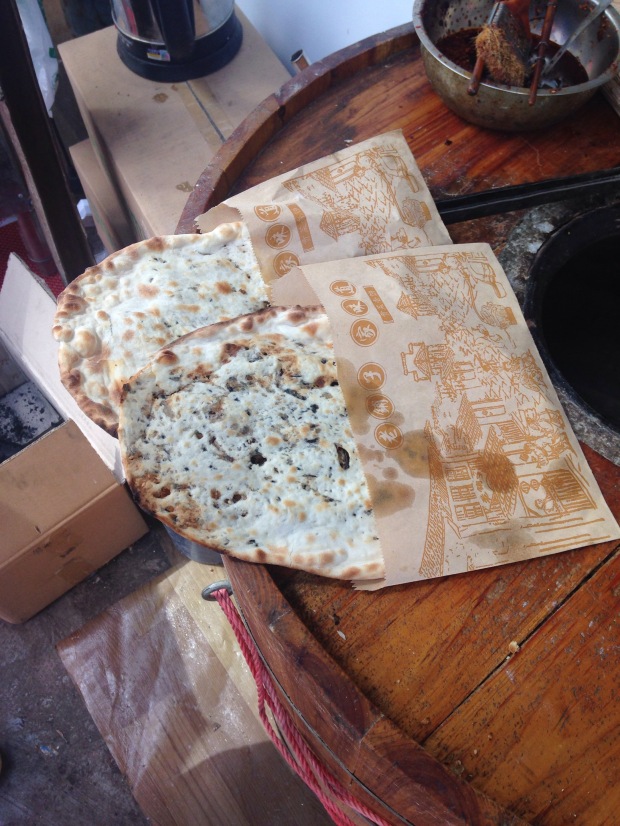 Unfortunately Rudy was leaving for Shanghai this afternoon so we sad goodbye at the hostel.
We’d planned to see the biggest fountain light show in Asia this evening so wanted to have dinner beforehand… We went back to the Muslim area!

There was still a few dishes that Leah and I wanted to try so she ordered the deep fried soft shell crab (which we’d seen lots of people eating), while we shared some spiced new potatoes and I ate mixed vegetable and buckwheat noodles. The noodles were really nice as they were completely different to the other noodles that I’ve had in China so far – more like wholewheat spaghetti from the UK.

We also bought some dried persimmon to eat for dessert – Leahs never tried it before and It seems to be popular in Xi’an (although only dried, not fresh).

We got on the bus to the fountain and it was absolutely rammed! We probably picked the worse day to visit (Valentine’s Day)! Once off the bus we joined the large crowds (stopping along the way to buy a cold beer each) which swarmed to the fountains. All of the seats along the fountain edge were taken but we managed to find a standing spot with a pretty good view. 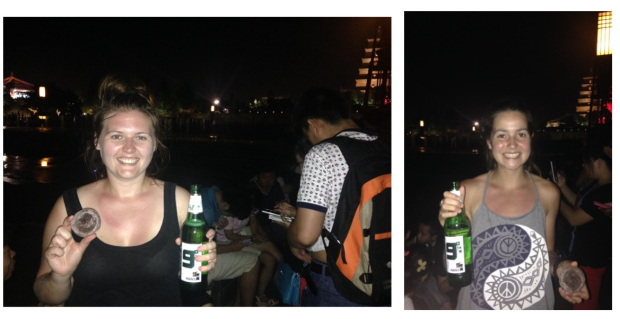 We ate our persimmons and drank out beer just before the light show started. It was actually really good! The music, lights and fountain water height all linked really well together and it made the water look like it was dancing in time. All the children around us were ooooing and ahhhing, it was really cute!

Unfortunately from all of the walking and standing around today my foot was really hurting so I had to sit down on the steps and miss the end of the show. I made Leah stay where she was and she really enjoyed the whole 20 minutes show.
Once the show was over we had to rejoin the swarm of people heading for the exits. There was lots going on still in the evening: restaurants, parks, amusements etc. but we wanted to try and get in a tuk tuk home (because of my foot) before the mass crowds emerged for all of the taxis.

We actually got in a tuk tuk pretty easily and we’re back in the hostel in no-time at all! The driver was a little bit crazy… He drove with the doors open (although he did have doors – rare for a tuk tuk), far too fast, weaving in and out of the cars and through red lights!

Valentine’s beer
Because it was Chinese Valentine’s and it was still pretty early we went to the hostel bar for a beer while I iced my foot – very romantic. After we’d ordered our drinks a waitress put a glow stick bracelet on us because we’re single and asked whether we would like to play some Valentine’s bar games… We thought it would be funny so said yes!

After a few minutes we actually looked around the bar and saw that there was absolutely no western people there. We asked the waitress if anyone spoke English… As soon as she said no we downed our drinks and quickly bailed from the bar…