I stayed close to our hostel on my run this morning because walking around Chongqing yesterday made me realise how confusing the street layout is. The area we’re currently in is quite good for running though because it’s very undulating so I’m able to get in some incline training!
The streets were really empty when I set off and the temperature was relatively cool (26 degrees) so I was able to run a 5km pretty quickly. It felt great to actually be able to run fast without worrying about dehydration and getting lost!

My run also brought me past the same street 3 times which got really busy with vendors and the breakfast crowd about 8am. Most people seemed to be getting noodles which is apparently really popular here- I want to try it but I’m nervous it’ll all have meat in…

After my run we walked to the metro station looking for fruit to buy along the way. Last night the streets were filled with fruit stalls – there were whole, halved and quartered watermelons everywhere! As well as bananas, peaches, apples, plums etc. but this morning there wasn’t one banana in site! We’d been told previously that a lot of people in China eat more savoury foods in the morning and save fruit for the afternoon/ dessert, so now we know that we need to buy our breakfast the evening before!

We got the metro to Ciqikou – the old town of Chongqing- and were a bit surprised at what we found.
We knew that it would be busy with tourists but we hoped that going on a Wednesday morning it wouldn’t be too bad. It was rammed! As soon as you get out of the metro, crowds of people are flocking to the old gates at the entrance of the town. 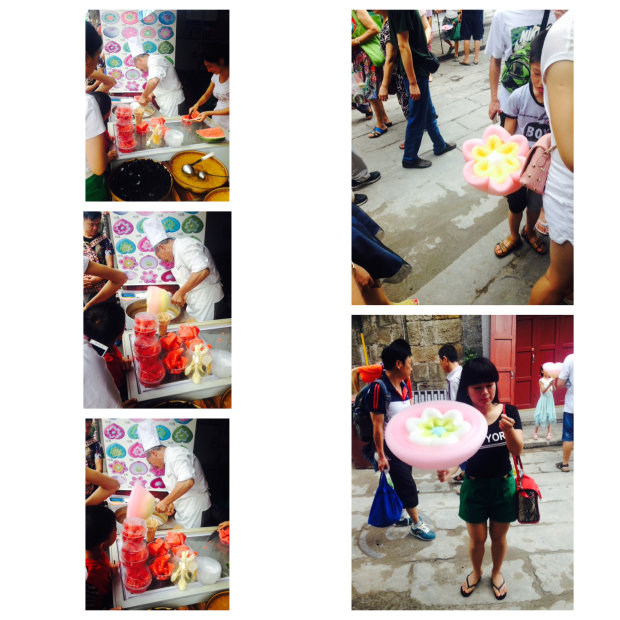 The town itself is so pretty though! There’s lots of traditional old buildings and shop fronts, and once you walk through the town you reach the river where people are swimming and fishing.

However, to see all of this you have to weave your way through the mass of people in front of you, who keep stopping to look in the various trinket stalls that line either side of the streets.

Some of the shops looked really interesting and sold speciality products such as regional teas, traditional snacks and handmade jewellery (which you could watch being made) but others sold tourist merchandise.

We tried to find the Buddhist temple which was in the centre of Ciqikou but no-one that we asked knew where it was. For us this was one of the main reasons for coming here but even the shop keepers there had never heard of it! Luckily we found one guy, working in a shoe shop, that pointed us in the right direction.

The temple was like a little oasis away from all of the chaos in the streets below. It was up a large set of stone steps and we only saw 6 people on the whole site (two other westerners, a security guard, the ticketer, and leah and myself)! 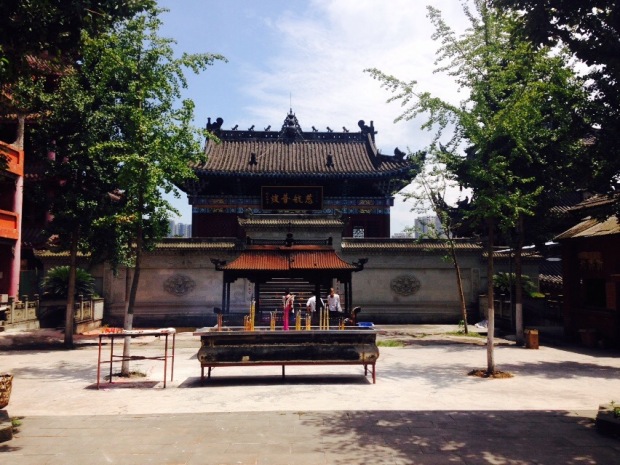 Back in the main streets the food stalls were really busy come lunch time and we joined a queue for one of the busiest; a spiral potato skewer (it was actually pretty good), pineapple rice (what I had and was really tasty), and skewered meat (which leah tried off of two stalls- the first one looked vile and it was just a lump of fat covered in spices, the second she actually ate as it was the meat she was expecting from the first). 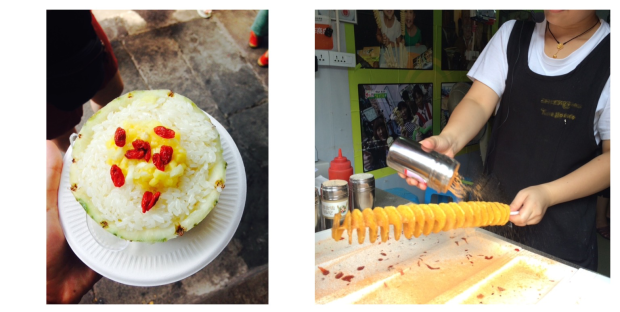 We only had a light lunch because we wanted to have an early dinner as we needed to be at the dock by 7pm to catch our cruise. Dinner was a bit quicker than we expected, we tried to find a restaurant called Shenfang 123 (recommended in lonely planet) but we could find it so ended up in a restaurant in a shopping centre. The food was good (except that they put bacon in my cauliflower stir fry- again!) but the rest of the meal was really tasty!

Evening cruise along the Yangtze

The dock where we had to board our boat was really busy! Everyone seemed to be running in different directions and all of the signs were in Chinese. We were looking for dock number 7 but we didn’t have any idea where it was. We also weren’t sure what the boat looked like – we’d booked one of the cheapest boat rides so we were expecting it to look a little rough. We saw one boat mored up and really hoped that if wasn’t our one! 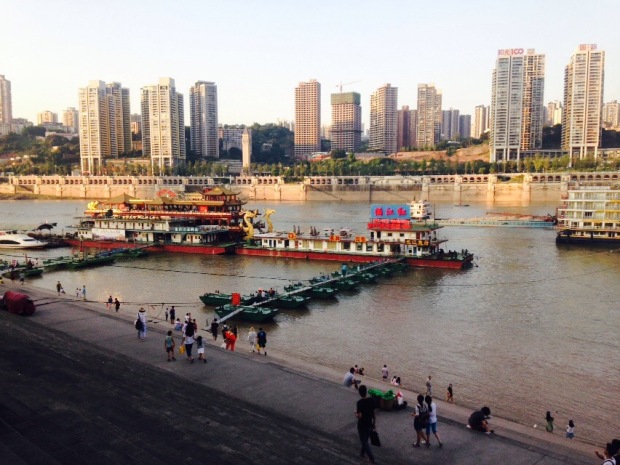 Luckily another helpful women saw our look of confusion and can to our rescue telling us where we had to go.

We got down to the docking platform and boardered a much nicer boat than we expected, found a seat on the roof top (we had to pay another ¥30 each to sit there but it was worth it) and opened our beers that we’d brought with us.
Even before the boat set off the experience was already really nice. It was almost 7.30pm, the sun was just about to set and we were on the river looking across to the streets on the opposite side.

As we set off night fell and the streets were illuminated with lights all over the buildings! All of the boats that passed us where lit up too! It’s defiantly something that I would recommend to other people. 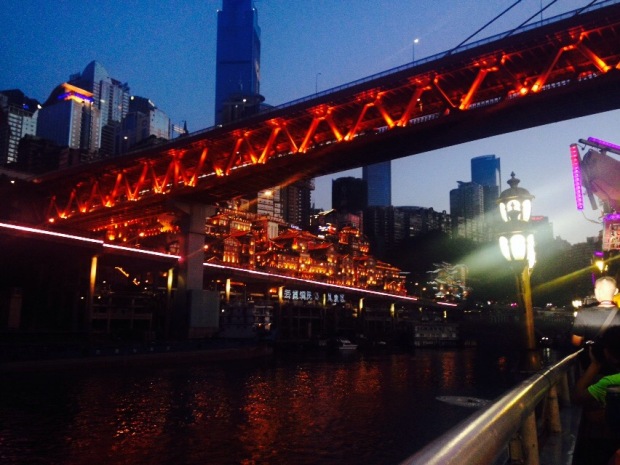 The boat ride itself was pretty quick (one hour) and it seemed that all of the boats returned to the dock at the same time. Getting back up to street level was a little difficult because the pathways were really busy again, this time with people, cars and street stalls.
After we found our way to the main area we went back to the Westin hotel from last night. We’d had two giant beers on the boat and was really full so was just going to get one drink to share. When we got to the Westin we synced to the wifi before we got to the bar and noticed that we were receiving Facebook notifications! The hotel must’ve bought a vpn for its guests and we’d manage to log onto it!

We sat down in some chairs by the main hall and planned to just log onto Facebook for 10minutes to see what we’d missed since being away – one hour later and we were still there!
It’s really strange because we haven’t missed social media that much since being in China. Both Leah and I were almost social media addicts before we left (Instagram was our drug) but we hadn’t really missed it at all.

It’s been pretty nice being disconnected with the world for a while! We’ve still got whatsapp and email so can stay in contact with family and friends but there’s not been any pressure to upload onto Facebook or Instagram so we’ve been able to just enjoy living in the moment! 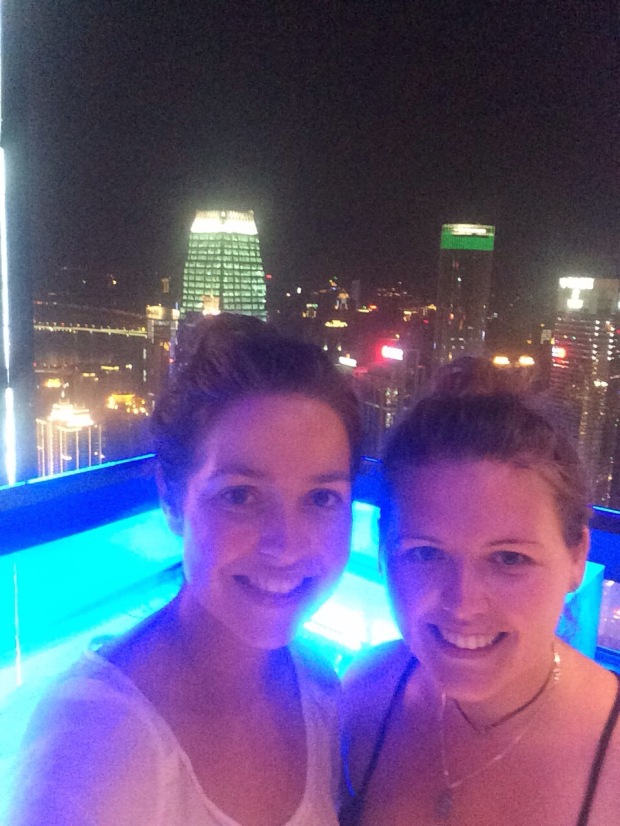