We bought a can of beer to drink back in the hotel room as we good ready (classy ladies), put on our nicest clothes and some mascara and then set off for our holiday evening.

We went back to the park along the bund and it was actually buzzing! The park seemed to come alive after dark! There were lots of people walking, jogging, rollerblading and running around. People were dancing in large groups, playing badminton and a game with looked similar to hacky-sack. A lot of people were flying kites with lights attached so they looked beautiful against the starry sky above. It might sound corney but the whole situation seemed magical!

We went to find dinner in a nearby restaurant and it was as cute inside as it was along the park. We ordered another beer and got to taste some of the most flavoursome food that I’ve ever eaten! We ordered green beans which came marinaded in garlic, tofu which was just how I like it (a little bit hard with lots of flavour), a celery salad which provided us with something crunchy and fresh, and then some rice to share. We weren’t that hungry when we sat down to eat but we ate every piece of food because it tasted so good!

By 9.30pm we were one of the last people in the restaurant- it says in the lonely planet that everyone eats dinner between 6 and 8pm and that seems to be pretty spot on here.
After dinner we passed a bar on the way home and popped in for another beer (yes, another one). The staff were really welcoming and sat us at a table with purple velvet thrones by the glass wall at the entrance. The music was really cheesy, the beer was cold and their was a really good atmosphere coming from everyone in the bar. Two men came up to us, said hello, asked us where we were from, and welcomed us to China. After a quick gambe (cheers in Chinese) they went back to their seats. We’d noticed that there was only groups of men in the bar and that some seemed to be ‘together’ but after as we were finishing our beer we realised that we were actually we’d somehow managed to find a gay bar in China – something that we really weren’t expecting!

After leaving the bar – we were either feeling brave or a little bit tipsy- we walked into a really nice building called the Harvey Johnson to check out their roof top bar. From the outside it looks like a giant golden globe which becomes a multi coloured light show once the sun goes down. We’d been admiring it all evening so boarded the glass lift from reception up to the 42nd floor.

The views were spectacular on the way up. All of the big buildings along the bund were illuminated similarly to the bund skyline in Shanghai (just on a smaller scale).
The drinks prices at this bar were actually relatively cheap compared to what it would be in London. Cocktails were about ¥50 (£5) and the view would be something to rival most London skylines. The only downside was that the bar was pretty empty, it was Monday night after all, so we said that we’d try again another night. 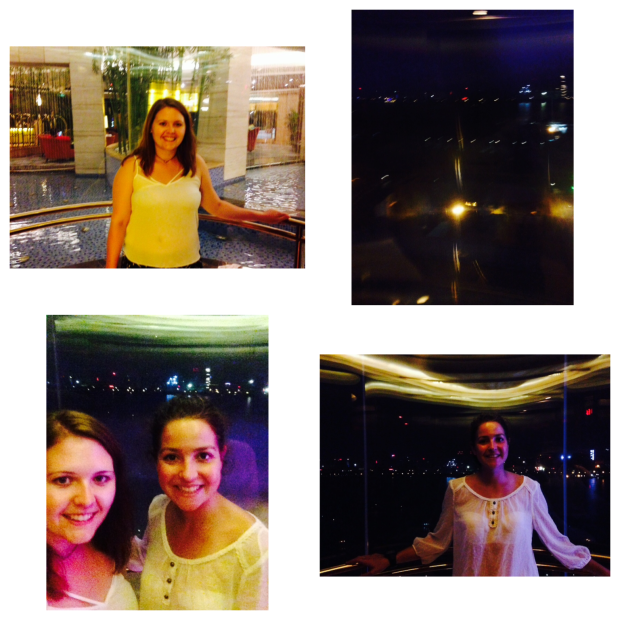